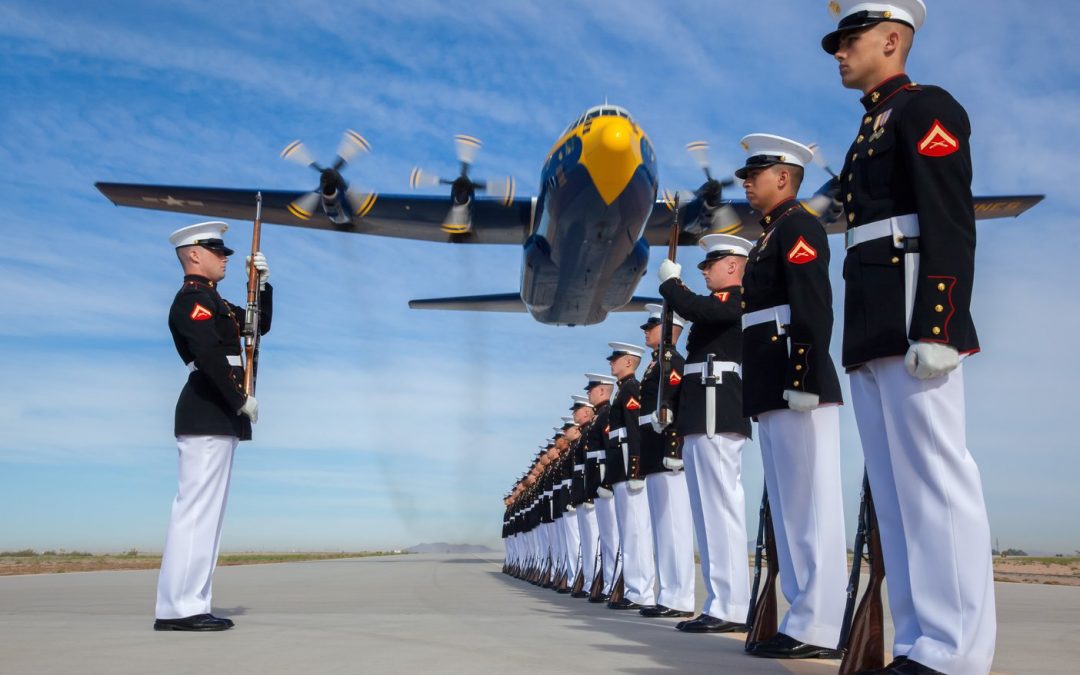 As a Marine Corps Logistics Officer, I’ve enjoyed managing the business of the Marine Corps in various capacities since I was commissioned in 1992. When I was 28 years old, I was responsible for literally millions of dollars of equipment and assets. It’s amazing what an experience like that will do for ones capabilities…

I’ve held three Marine commands, which is the highest calling of any Marine Corps officer. During command, all of ones facets of leadership are brought to bear and tested. When confronted with adversarial situations – which regularly occur in the military (just like they do in “the real world”) – we had to turn them around. Every time. This is easier said than done, and one’s character becomes distilled in the process.

As I work to apply Marine Corps teachings into “the real world” of business, I believe it’s important to espouse similar principles of mission accomplishment, commitment, courage, and capability. I’d like to apply some principles with you here now, allowing you to try them on, and determine if these characteristics might fit your business culture.

General James F. Amos, the 35th Commandant of the Marine Corps, is known for his quotes on planning effective military campaigns.

Imagine not planning a battle before it is conducted. The result would be chaos and reactivity on the battlefield. The same applies to running a business. The KEY here is not to just develop a “plan” for the sake of the plan (which is a key component), but to look beyond this result and focus on what it takes from you, and makes OF you in the process; instilling the confidence to bring to bear during tough times, conditioning you to perform at this level as consistently as you’d like.

In preparation to collect and repatriate 50,000 fleeing refugees from Cuba and Haiti in 1994, we had to plan the lease of an island in the British West Indies (Grand Turk Island), and build a repatriation camp. I vividly recall the extensive efforts of negotiation, surveying, coordinating, liaison with government officials and civilians, and presenting the Marine Corps in the best possible light in key political and social realms, all the while focusing on mission accomplishment. When big missions like that come to your business, step into it with a confident plan, and make sure you engage the right resources to plan and manage the project.

As you plan, you must also plan for the contingencies, whatever those may be. Whether it be market conditions, the competitive nature of your marketplace, or fiction within the team, you must be able to adapt skillfully. Without flexibility (“leeway”), the leader becomes constrained with the gridlock of the structure of the context, like being caught in a spider’s web…

When my crack unit of technology-savvy Marines deployed the Marine Corps logistics automated information system across Europe, as we redeployed all of the old Iron Curtain assets in 1993, we were given an impossible timeline to accomplish the entire mission – from deployment to Luxembourg, Belgium, and Germany, inventorying all major end items, and associating parent/child relationships in the database, tracking each piece of equipment to its official owner, then ensuring that it all got delivered as required. This required late nights, little sleep, and maintaining moral in an aggressive mission environment. Without flexibility, this mission could not have been conducted.

Focus on being resourceful in your responses to situations that require your attention in the business. Have confidence knowing that your work ethic and resilience will prevail.

Innovation is scary. It’s the unknown. But that’s where business success lies: in knowing the unknown… in essence, predicting market conditions, so that when they occur, you are ready to accommodate them. Otherwise, you’re just doing what everyone else is, and you’re not differentiating… therefore you cannot be significant.

If we fear unconventional methodologies (like nuclear warfare or insurgencies), the daunt that accompanies this fear precludes us from effective responsiveness and resilience. We must also be oriented toward how the enemy will respond innovatively as well, and quickly adapt to those tactics and strategies.

As a Marine, I’ve regularly been assessed as an innovative leader, bring a coaching ethic into a relatively militant environment. This ethic has served me well on multiple levels.

In the Marines, it’s understood that you’re not fighting for yourself, you’re fighting for the Marines beside you. Watch the popular moving “Battle Los Angeles” for a fine example of this. Imagine your business’ team running that well-oiled and integrous. It can be done; it just takes commitment and discipline (keeping it fun all the way along).

During complex logistics operations, I had to rely upon the expertise and commitment of my subordinate and higher leaders; there’s no possible way that the missions could have been conducted otherwise. It’s the trust that counts…

Ultimate, all we do is “relate.” We relate to the enemy in ways that dissuade him, so that we may overcome him. In the content of allied relations, which are oriented toward empowering and directing the organization, we must not let too many assumptions creep into those relationships. Candor is critical; and it must be wielded tactfully.

Awareness of how you relate as a leader on multiple levels is imperative. A leader without followers is simply going on a walk…

There was a time when I was forced to turn an adversarial relationship with a senior enlisted leader, who had MUCH more experience than I in the operational logistics realm. To this day, my ability to humble myself to this apparently abrasive and condescending Marine’s capabilities remains one of my lifetime stories of fostering empowering relationships. That Marine and I became very close as we led the Company, and our trust for one another blossomed into a profound respect for one another.

The Marine Corps has taught me a lot over the decades. Mostly about integrity, honor, courage, and service. Yet I feel that the most valuable lessons, which support my purpose and calling in this life, are relative to the application of these principles in business. Lest we descend to our apparent instincts of lack, blame, excuses, and denial… It’s tough enough to deal with these dramas; why not adopt some leadership fundamentals from our nation’s most elite fighting force? The answer for me has always been to engage at a higher level of courage and capability.

May it become yours as well.